Once we have installed BBMOD and converted our 3D model from a common file format to *.bbmod (see tutorials Converting models with BBMOD CLI and Converting models with BBMOD GUI), we can finally include it into our GameMaker project, load it and draw it on the screen. In this tutorial we will have a look at how to do that in as little steps as possible, to get us started quickly on our 3D game development journey.

In this tutorial we will be using a character by Kenney.nl, available for free from https://kenney.nl/assets/animated-characters. This is not a tutorial on how to draw animated models, so the character has been already posed and exported as a regular static mesh.

Since *.bbmod files are not regular GameMaker resources, like sprites for example, we have to add them into our project as Included Files. These files are simply copied into the same directory as the game's executable. Since we do not want to pollute the folder where the exe will be with our 3D models etc., we will put our Character.bbmod into the Data subfolder. 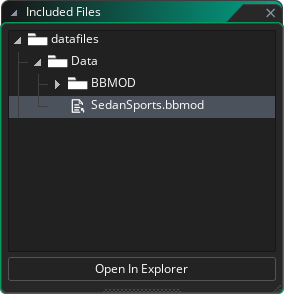 With our model placed in the right directory, we can go ahead and create an object that will load it in its Create event:

At this point we have our model loaded, but we can also make it render faster by using its freeze method:

BBMOD offers two ways of drawing models - either using method submit or method render. While the latter allows us to use BBMOD to its fullest potential, it requires a bit more setup than the former. In this tutorial we are learning how to draw a 3D model in as little steps as possible, so we will be using submit. When using this method, we must call function bbmod_material_reset before and after drawing models! This is because submit immediately sets shaders used by the model's materials and these need to be unset at some point, otherwise they would also affect drawing things that we do not want to.

If we were to put our object into a room and run the game, it is likely that we would not be able to see the model just yet. That is because we have not changed its transformation and it is drawn at the same size and the same position as we have created it in our 3D modeling software. For example, if we have created a cube that was 1 unit in size and placed at the 0,0,0 coordinate, then in GameMaker it would be drawn as a one pixel at the top left corner of the window. This can be changed through something that is called the "world matrix" - either using the built-in GML function matrix_set, or using BBMOD's utility struct BBMOD_Matrix:

What the first added line does is that it creates a new identity matrix (a matrix that does not transform how things are drawn), scales it by 100 on all axes, moves it by the instance's position in the room and then sets it as the current world matrix. After we draw the model, we do not want the world matrix to affect other things that we would draw, so we change it back to the identity matrix.

When we now place the object into a room and run the game, we should be able to see the model using the default material with a checkerboard texture. 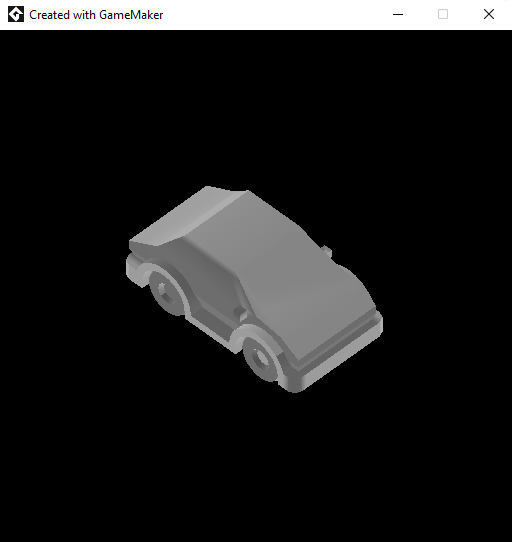 We can change this by making new materials and assigning them to the model. To make a new material, we do not actually have to write new shaders and new material structs from scratch. Instead we can just create copies of already existing materials, like BBMOD_MATERIAL_DEFAULT, and change their properties:

Here SprCharacter is a regular sprite resource, but to be able to use it as a texture, we need to check the "Separate Texture Page" checkbox (1) under its "Texture Settings": 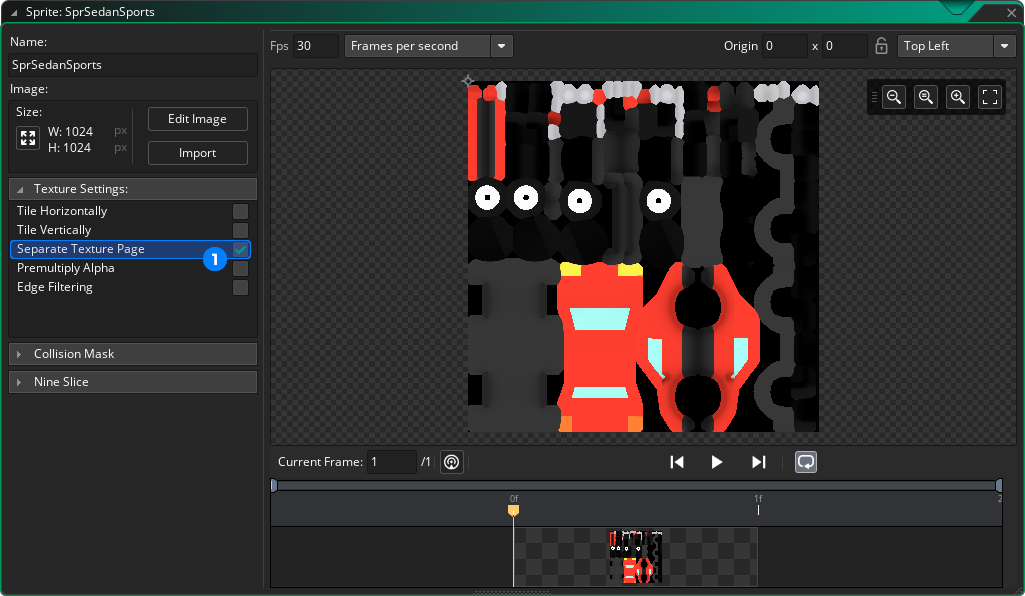 Now we can use method set_material to apply the material to the model:

The name of the material slots can be always found in the _log.txt file created during the model conversion, but if we somehow do not know the names, we can just write the materials directly to the Materials array. This is exactly the same as when using set_material, except we need to find out in which order are the materials stored in the array (which is in our case simple, since our model has only one material).

Here BBMOD_C_WHITE and BBMOD_C_GRAY are just macros for BBMOD_Color, which is BBMOD's custom color structure that supports HDR colors with range over 255. 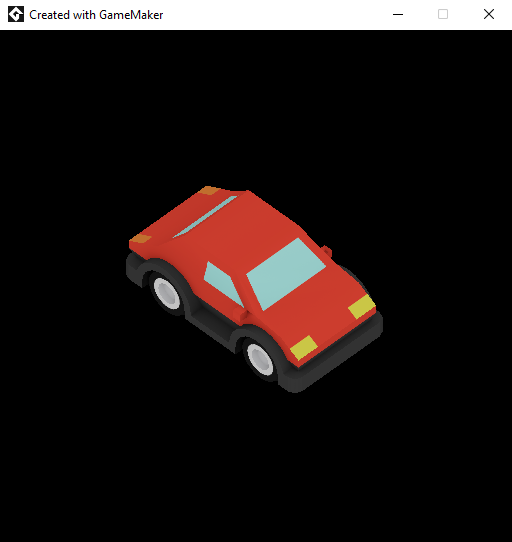 Congratulations, you have now rendered your first 3D model in GameMaker!

There is still one issue that you may have noticed - we are loading the same model and re-creating the same materials over and over again in the Create event of every instance, which is definitely not ideal. BBMOD does offer an advanced solution for this issue in form of a resource manager, but that is outside of the scope of this tutorial. For starters, we recommend you to add a special room at the beginning of the game, where you will load and create all required resources and store them into a globally accessible struct:

And then just use the resources in your game objects like so:

When you do not need a certain model or material anymore, you should free it using method destroy to avoid memory leaks. Though if you create all your resources only once at the game start like described above, then you do not have to worry about this, as they will all be destroyed at the end of the game.

Support us in developing BBMOD, get priority assistance and more of our amazing tools as a reward! 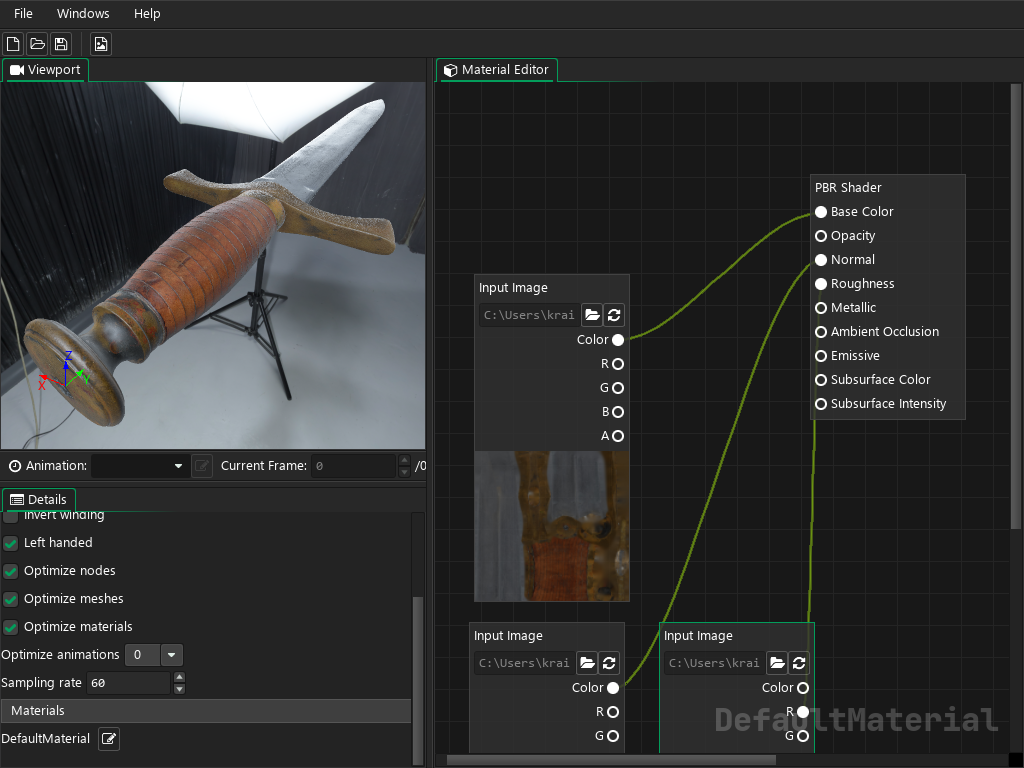 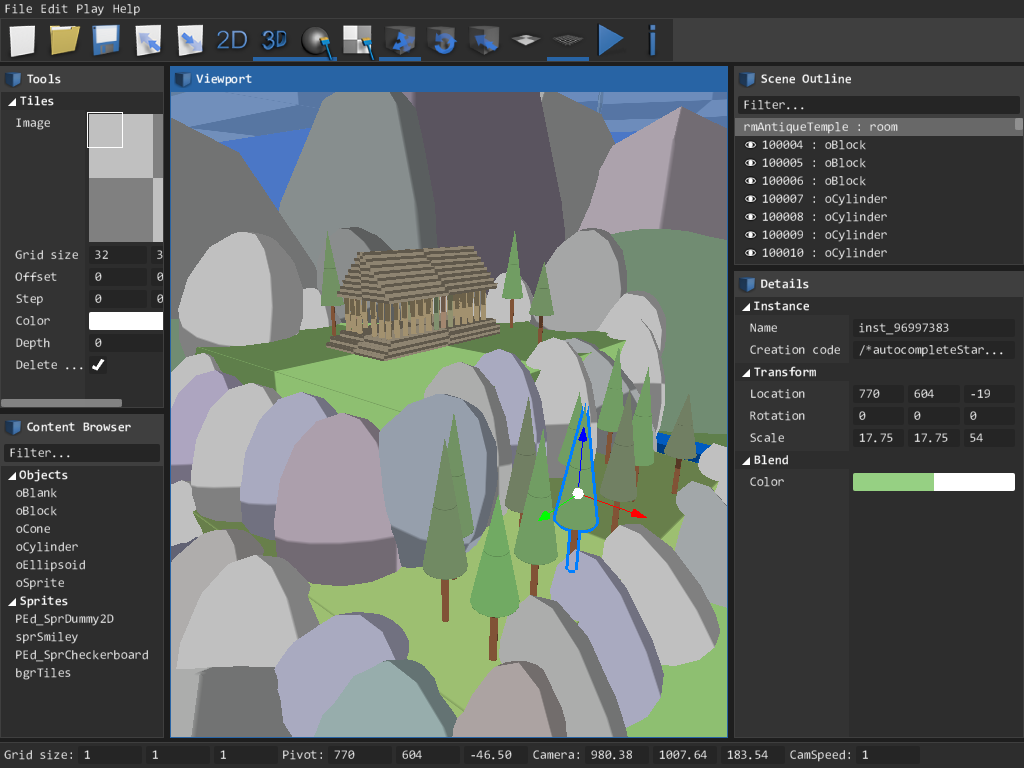 Don't miss out on a thing!